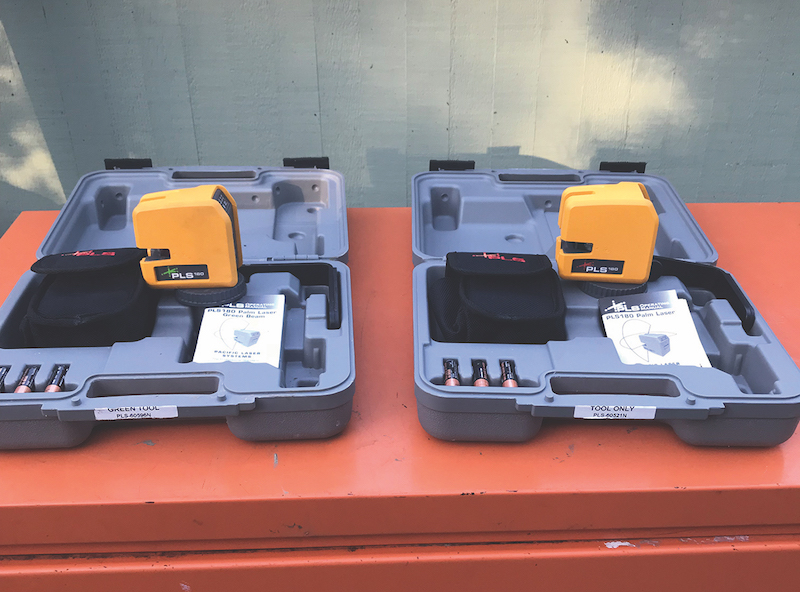 PLS Line Lasers Time really does fly by. How many times have we heard this… yet as is so often the case, the lesson is lost to the ignorance of youth. Recently I was reminded of these truths while reflecting on my initial introduction to the world of laser leveling tools. Initially, there was really only one. Simple by today’s standard, they were large, awkward and fragile devices that had to be adjusted mechanically. The rotating invisible laser beam worked solely in the horizontal plane and relied completely on a handheld detector to “see” the beam. It was prohibitively expensive and produced in California by a company called Spectra Physics. The tool’s expense and physical limitations made it only practical for use on large, flat commercial projects. Barely eight months into my apprenticeship, I was dispatched to a contractor building a 22,000-sq. ft. tilt-up structure. Large and flat describes the early stages of a tilt-up to a T. I still remember my first day on site, listening to the incessant noise these tools made, a constant stream of fast and slow “chirp, chirp, chirps” plus the occasional long “beeeep” as the detector zeroed in on the invisible beam. Now fast forward. They still make the same sounds, but that’s where the similarities end.  Contrasting those with what is available today and the landscape is unrecognizable. Today there are primarily three types of laser tools: the rotary beam, the line laser, and the point laser. After owning multiple models of all three types, I have found the line laser to be the most versatile and useful in my deck business and my homebuilding business. I recently had the opportunity to evaluate a pair of newly updated, competitively priced, high quality laser tools produced by Pacific Laser Systems, based in Everett, WA.

How Steel Deck Framing Is Changing the Industry

The substructure of a deck is the heart of its durability and the foundation for its aesthetics. Until recently, wood has been the go-to material for builders, contractors and architects. However, as professionals are increasingly switching to steel for its superior structural integrity and design flexibility, steel deck framing is poised to be the next big thing. Exterior structures must withstand much harsher environments, which is why steel deck framing intended for the outdoors is triple-coated—first with a layer of hot-dipped galvanized coating, then with a layer of baked-on prime coat, and finished off with a layer of baked-on exterior high-performance polyester coating. It all adds up to an unparalleled level of protection surrounding a carbon steel core, ensuring each critical joist, beam and ledger connection holds up to the elements and to daily wear and tear for decades. Steve and Brucie Schneider, TrexPro deck builders in San Rafael, CA., are the most prolific users of Trex Elevations steel deck framing in the West. Since they began advising clients to choose steel deck framing as a replacement for pressure-treated wood two years ago, they have built dozens of decks using Elevations framing. The innovative and creative options steel offers makes the product their go-to choice. Elevations “allows you to create designs that are time-consuming if you tried it with other materials,” says Steve Schneider. Chief among them, curves. “We do lots of low-level decks, close to the ground. We do long curves that meander with the landscape. Steel deck framing opens up the design possibilities.” Schneider also likes that he can easily use the steel material in ways that aren’t deck-related, such as in the construction of low-level retaining walls, flower boxes and landscape walls. The steel framing system reduces excavation time and allows builders to create longer cantilevers—saving time,

Perma-Column’s signature line of deck posts has been certified by the International Code Council as complying with international building codes. Certification from ICC, the authority on building code compliance, means builders can more quickly attain approvals and permits, while customers gain a greater trust in the products. Based in Ossian, IN., Perma-Column developed its patented design to address the industrywide problem of rotting wood posts in foundation systems. Wood is elevated out of the ground via a steel bracket atop a precast concrete foundational pier. For builders, the design eliminates the hassles of pouring concrete on the jobsite, making deck construction quicker and more efficient. Perma-Column deck posts, which are guaranteed for life, are reportedly three times stronger than standard concrete, providing a permanent solution for long-lasting decks. “Obtaining an ICC certificate of compliance is not easy,” noted president Mark A. Stover. “A manufacturer must be willing and able to invest significant time and resources during the approval process. This is the best way to ensure the quality of our product and shows how dedicated we are to being an industry leader. Builders can work with the confidence that our deck products will meet national and international code requirements.”