For years, decks, elevated patios and balconies have been popular choices for homeowners when designing or remodeling their outside living spaces. However, until recently, decking options have been limited primarily to wood or composite materials. Natural stone, pavers and tile—while aesthetically appealing—were simply too heavy and difficult to install on traditional wood joist framing.
However, new installation products and techniques are opening up up the entire range of stone options for elevated surfaces to include the use of natural stone pavers, travertine, pavers, slate, marble, and tile.
“With traditional deck materials, it was nearly impossible to use stone on any elevated surface,” explains general contractor Jim Richardson, Richardson Brothers Construction & Demolition, Kendall, N.Y. “I wanted to offer stone decks to my customers, but any underlayment would have trapped moisture. Plus, the joist system would have to be significantly reinforced to support the weight.”
According to Richardson, whose company builds and remodels high-end, custom homes, many of his customers are naturally attracted to stone because it adds substantial value to their homes and increases the aesthetic appeal of the property, while requiring little maintenance.
“In my opinion, no composite deck can compare to the beauty of a stone deck,” Richardson adds. “There’s something about the stone that adds style and class and just feels solid.”
The weather in the upstate New York area also can dictate the use of elevated surfaces for non-deck areas. Due to freezing and thaws in the region, installing stone directly on the ground can have unexpected consequences.
“Even with thorough base preparation, the freezing ground, frequent thaws and ground settling make it very difficult to install stone on the ground,” Richardson explains. “As the years pass, pavers tend to heave up and down, requiring further upkeep and maintenance.”
Instead, by elevating the stone, “there is no more heaving, and the grass doesn’t grow between the pavers,” says Richardson.
His solution was Silca Grates, a deck inlay subflooring grid that can be used on new decks, as well as for retrofit applications. Based on the hexagonally structure of beehives and manufactured from engineered polymers into 1-1/2”-thick grids, the system provides a structural surface for natural stone and manufactured pavers.
They are fastened to the deck joists 16 inches on center using four 3” deck screws coated for pressure treated lumber. The grates can easily be cut to any length or contour using a circular, table or reciprocating saw.
“I was amazed at how easy it was to cut and install to match the shape of any elevated structure,” says Richardson. “I can use it to build anything my customer’s desire using stone, slate, or bricks—including two-story decks, two or three-tier decks, stairs. The possibilities are unlimited.”
Mark Batz, a homeowner in Sherwood, OR., was looking to replace a well-worn 25-year-old cedar deck. Recurring pressure washing and mandatory sealer treatments every few years were taking its toll on Batz, who at 62 years old, was looking forward to relaxing on his deck rather than maintaining it.
So when Batz came across a local contractor looking to discard several truckloads of used pavers and sand that belonged to them from a recent municipal project, he decided to use the material to install two ground level patios in his backyard.
His next idea was to remodel his elevated wood deck as well.  After conducting some internet research on “elevated stone or paver decks,” he discovered the Silca System.
According to Batz, he purchased the product and then installed the pavers on the grates with the help of a contractor friend that also assisted in obtaining the required permits for the project.  He then utilized the remaining pavers and the Silca grates on some stairs and even created a hardscape pathway to match the deck.
Batz says the Silca grates were easy to work with despite some intricate deck features.
“I had to create very specific shapes to fit several octagonal breakfast nooks,” explains Batz. “We used a circular saw with a blade for plastic and the grates cut like butter.  They were so easy to install.” 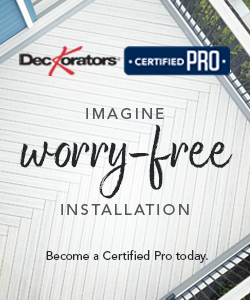